my life with boys

the musings of a san diego mom who loves her city, her life and her boys.

if you know my firstborn, you know he has a real obsession with science.
it's not an overstatement by any stretch. his teacher mentioned it in our recent
parent/teacher conference and said she noticed it in kindergarten last year.
it actually started a year before that.

i asked if it was a 'problem' and she said absolutely not.
just that it was rare for her to see so much passion in someone so young.
she's been teaching 17 years

finn will be the first to tell you he has (3) passions: science, robotics and space.

since we had a rocket party his his 4th birthday and a robot party for his 6th,
i wasn't surprised when he asked for a 'science' themed birthday party for
his upcoming 7th bday. this is truly the perfect theme for our finney.
the only problem? i wasn't sure where to start.

since i'm not nearly the science enthusiast finn is,
i turned to other half - christopher.
he likes science and can relate to finn much more in this world.
he suggested a 'Mad Science' party and finn (and i) were thrilled!

since i was home sick and not able to do much more than simply lay around,
i spent a little time surfing the internet for 'mad science' party ideas.
it's not the most popular theme, but i was able to get a few.
it's always a treat to find a blogger (mom or other) who will share their ideas and
pictures so freely with the world. they provide so many great ideas and inspiration.

i found this adorable 'brain cake' and had to share with finn.
who'd of thought a brain cake could look tasty? *grin*
finn said it was "cool" but also said a cake that had a wide botton and a skinny long top
would be cool too. i think he was referring to a beaker shaped cake.
i shared the brain cake pix and finn's comments with with cakemaster christopher.

i'm anxious to see what he comes up with... 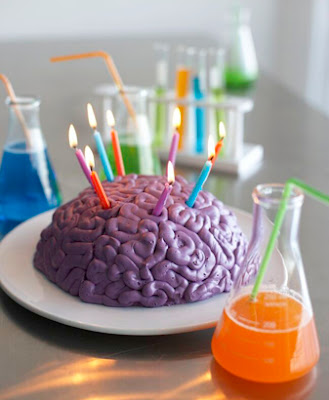 the party is scheduled for sunday, january 30th.
finn can hardly wait - he is SO excited!
next to christmas, im not sure if there's anything more exciting than a birthday.
i admit, i'm a little excited too.
Posted by Angela

Angela
San Diego, CA, United States
I'm a Southern California mom to 2 boys and a wifey to my long-time love. I work full-time and life is a bit crazy, but I strive to remember to take time to enjoy the little things, because in the end, it's those things that will matter most.